KNX is a two-wire bus for building automation. It operates at a pretty low bitrate, which makes it a good candidate for analyzing communications using a cheap logic analyzer. This article is about the Acknowlegement procedure at the KNX Link Layer.

As with many communication stacks, KNX1 is split into several layers. The Link Layer (Layer 2) is the one that sits on top of the Physical Layer (Layer 1). Its job is to make sure that data is exchanged correctly between KNX devices. An important aspect of this is the Acknowlegdgement procedure: Every KNX telegram is acknowledged by one or more receivers when transmitted over the wire.

The image below shows the setup for experimenting with Link-Layer messaging. You can see how horizontal communication (logical, between Link Layers) is captured indirectly on the two-wire medium using a logic analyzer. 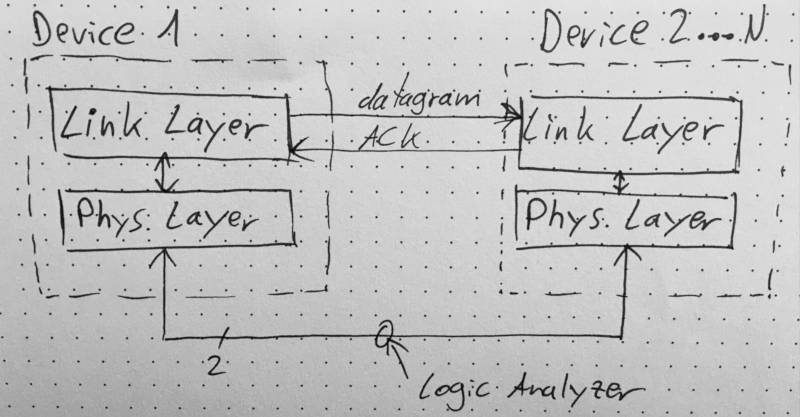 Acknowledgment on the KNX Link Layer is also called Immediate ACK (IACK) in KNX jargon, presumably to differentiate it from other ack methods on the upper layers. Here’s how it is supposed to work:

Here’s how this looks on the wire, captured from a logic analyzer:

This recording shows a KNX telegram from address 0x11CF (1.1.207) to group address2 0x0901 (1/1/1). It is followed by an ACK character (0xCC), issued by the receiving device. The telegram consists of nine individual characters, each of which is framed by a Start, Stop, and Parity bit, similar to RS-232.

What would happen if there was no positive acknowledgment after the sender transmitted the telegram? This situation is shown in the following picture. You can see four KNX telegrams, with nine characters each. The first one is identical to the one in the diagram above.

Details of the frame are not visible, due to the zoom level chosen. What we can see, however, is the missing ACK character after each of the telegrams. Because there was no ACK after transmitting the first telegram, the sender started another attempt. After three trials, it gave up.

Actually, I don’t know if that exact number of retries is mandatory – at least that’s what I’ve observed.

Now let’s zoom in a bit to highlight the beginning of each telegram.

It becomes clear that there is a tiny difference between the original telegram and the repeated ones: the first character (also called Control Field) has a difference in bit 5:

Bit #5 is the ‘repeat’ flag (who would have guessed that?). Its logic is inverted though: If it’s set, that means not repeated.

If we think about it, the repeat flag provides useful information for layers further up the KNX stack: The telegram might have been processed already, so any repeated one might better be ignored in that case. Especially if we think about more than one device listening to a single group address, this seems to make sense.

So far, we have looked at 1-to-1 relationships between one sender and one receiver. However, it is the very job of the KNX Link Layer to deliver telegrams from one sender to N receivers.

Let’s think about a situation with three devices connected to the bus: one sender and two receivers. The sender transmits a telegram to group address 1/1/1 – an address both receivers are configured to listen to.

Now, imagine that one receiver acknowledges the telegram (by transmitting an ACK character at the right time), while the other doesn’t respond at all. Do you think that, from the sender’s point of view, this is enough for the entire transmission to succeed?

It turns out that, due to the encoding of the bits (on layer 1, the Physical Layer), it is sufficient if only a single receiver acknowledges the telegram. This works as long as the other receiver simply stays passive on the bus during that time.

The implication of this is that a successful acknowledgment only tells the transmitting device that at least one device has received the telegram correctly.

Alright, it’s sufficient to get a response from a single receiver. What if one of the receivers actively reported a negative acknowledge instead of not reacting at all – perhaps due to a checksum error it’s seeing in the datagram?

In addition to the ACK character we’ve seen already, there are two other possible acknowledge characters a receiver may write to the bus: NACK (0x0C) and BUSY (0xC0).

So let’s look at the case where receiver A issues an ACK, while receiver B puts a NACK character onto the bus.

At this point, we need to consider how each bit is represented on the wire. This is the job of the Physical Layer. The short story is: For transmitting a 0 bit, the transmitter applies a certain load to the bus line for some microseconds. This makes the bus voltage drop and restore after a certain time. For transmitting a 1 bit, it simply does nothing during that period.

Interestingly, this scheme implies that 0 has priority over 1: As soon as device A decides to generate such a voltage drop, there is no way for device B to issue a 1 (because just staying passive won’t change anything, right?). In fact, the result on the bus is the logical AND of the bits written by all individual devices, as shown in the listing below.

This demonstrates that NACK overrides ACK on the bus.

We have seen KNX Group Acknowledgment in action: A single ack response is enough for the sending device to be confident in the success of the transaction. Also, we have observed three different acknowledgment types overriding each other: Even with many receivers on the bus, a single device can cause a set of retries by publishing a NACK character.